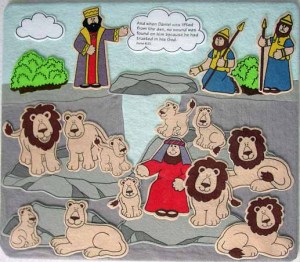 Pretty much everybody knows who Daniel is in the Bible.  My daughter has long known the story of Daniel and the lions’ den, and the story of “Rack, Shack, and Benny”, as Veggie Tales puts it, and the fiery furnace.  If you don’t, go read the book of Daniel.  It’s not long, and it’s full of end-times prophecies, and everybody loves that!

As I was reading through these old familiar stories, stories that come to life in my mind, replayed on flannel-graphs of my youth, something really struck me.

When’s the last time you saw courage as that displayed in these two familiar accounts?

I’m talking specifically about courage to stand up for what you believe in the face of persecution and possible death.  It’s a rare thing to behold.  I thought about it last night during a Bible study on Revelation.  A common thought by some (I don’t know why) is that they’ll just live like the devil until the Great Tribulation (!!!) and get saved then.  Right.  You don’t want to live for Jesus now, in this country, but you’ll live for Him then, when you’re faced with death for doing so?  Riiiiight.

But Daniel did it.  So did Rack, Shack, and Benny.  They were faced with what amounted to certain death in a lion’s den and an insanely hot furnace, respectively.  But look at what they did!  Daniel, upon hearing that the king signed a law that prohibited prayer to anyone besides the king, went to his house, opened the window, knelt down and prayer.  THREE TIMES.  This guy was the 3rd highest authority in the kingdom!  He had loads to lose, besides his head!  But he went and prayed to the God of all, trusting Him with his life.

Rack, Shack, and Benny had a similar situation, and when faced with the prospect of burning alive in a furnace so hot it killed the people that threw them in, stood up and told the king to do whatever he had to do.  And this is the kicker:  they said that while God certainly had the power to save them, if He chose not to, they would still worship Him! Woah.  THAT is dedication.  THAT is courage.

So that brings me to us.  Why are so many  hesitant to share their faith openly in this country?  Why do so many cringe when they see someone doing so?  “Oh, faith is a private thing!” they say.  No.  It’s not.  Christian, if the Bible is true, if Jesus died for our sins and rose again from death and is coming again in glory and judgment, if you believe this, then it is your duty to tell people.  Not doing so is like  a doctor who discovers a cure for cancer deciding to withhold it from the public.  It’s cruel.  It’s wrong.

So God, make us bold!  Give us all the courage to openly share our faith!  Too much depends on it!