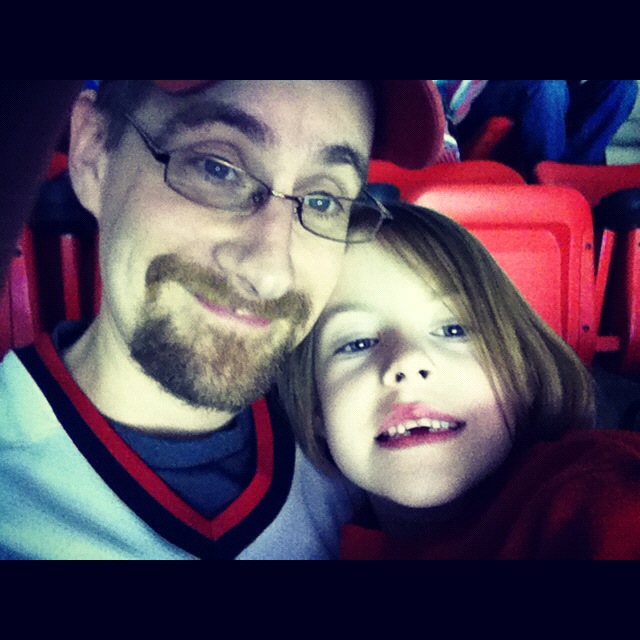 Last night I was blessed by a friend at church with 2 tickets to a Carolina Hurricanes game, and since my boy (and thus Amanda) is not game ready, I took my oldest daughter for a Daddy/Daughter night.  She’d been asking to go to a game for a while, and thanks to the free tickets, it became a reality.

The tickets were free, but alas, everything else wasn’t!  Man, I don’t know how people afford to take a whole family to a game!  Between the parking ($10!!!!  Now I know where they get the cash to pay the salaries of the players!) to food (I’m not even going there), there’s no way we’d be able to take the whole crew (unless we won the lotto).  So the free tickets were truly a blessing!

We really had a great time (even though the Canes lost yet another overtime game).  I think Caroline’s favorite parts were the Mighty Mites that played during the intermission, Stormy the Ice Hog (don’t ask if you don’t know) and the food.  For me, it was getting to spend a night with my oldest, and the look on her face when the Canes scored the first time, causing that insanely loud horn to sound.  Classic!  We even got to see our very first shoot-out (in the game, not the parking lot, thankfully).

One of the things that I noticed, now that I have kids, is how they react and respond to Dad and Mom when things are going well.  When they’re getting something they want, or doing something fun, you (the parent) can do no wrong.  They love on you, hug you, act so sweet it hurts your teeth, bat their eyes at you and all that.  It hit me that I used to do it all the time with my dad and mom!

What also hit me was that we do the same thing with God.  When life is good, we are all about some praise!  When things are going well, we’re full of thanks.  When we have a prayer that we need answered, we’re front and center at church.  We’re in the Word, we sing loud, we’re all smiles.

I think the reason we’re this way with God is the same reason our kids are this way with us.  We think we’re earning His love and approval.  We think that our cozying up to Him earns us brownie points.  In the end, I think it’s the reason is that we fail to believe that God loves us…PERIOD…in spite of ourselves, so much so that He sent His Son to die for our sins!  We think our behavior earns His love, when the truth is, His love goes before any of our displays of affection.

“But God demonstrates His own love toward us, in that while we were still sinners, Christ died for us.”  Romans 5:8

Just as I love my kids no matter how they act, because they are my kids, God loves us so much that before we could ever do anything to try and earn His love, He poured it out on the cross for us.

So lest you misunderstand, by all means, draw close!  Praise Him!  Love Him! Serve Him!  Yet do it out of a heart of love, out of a heart that has been changed by HIS love for you, not out of a misguided idea to win His affection.  You’ve already won it, by no merit of your own.  Jesus paid it all, all to Him you (and I) owe.  Sin had left a crimson stain, He washed it white as snow.

2 thoughts on “Hockey, Hot Dogs and the Unconditional Love of God”