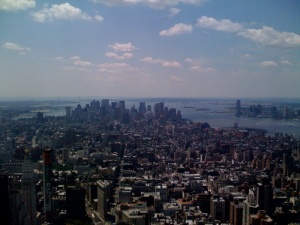 (I originally posted this after a trip to NYC with my bride, celebrating our 10th anniversary.  I felt it appropriate to repost it today.  12 years since the world changed…do you remember where you were?  Do you remember how it felt?  America…bless God.)

Well, we made it to the top of the tallest building in NYC. And let me
tell you, it was worth the wait. A picturesque day, and view to match.
I chose this pic because of what you see, but also because of what’s
missing. This is a shot looking south toward the spot where the World
Trade Center towers stood. They should be dominating this scene.

We made it down to Ground Zero (after a lunch in Little Italy near
some mafioso, and an encounter with a less than corteous tour guide).
And while the site itself is nothing but a fenced off construction
area, little St. Paul’s chapel was almost overwhelming. If you
remember, this church sits directly across he street from Ground Zero.
It was turned into a rest area of sorts for all the firemen and
volunteer clean-up workers after the attacks. Now, it’s a memorial to
the men and women who served there in the days and weeks after 9/11.

Powerful is an understatement.

One of the oldest churches in the city stood ready to help at her
darkest hour. In the midst of all the destruction and carnage, an
oasis of hope. God only knows the hope that church gave to those
workers, and to the families missing their loved ones.

In the cemetery behind the church, looking over at the WTC site, there
at two graves side by side. Those graves are for two men who served in
the Revolutionary War, who fought the first war for our freedom. Their
graves are marked by two long rectangular stone slabs, side by side
and facing the WTC. I couldn’t help but think how they stand for the
two men that stood tall for us, and for the towers that were brought
down in opposition to that very freedom.

But that freedom is bigger than those two towers. It’s bigger than all
of us. And today, I remembered just how precious it is. I remembered
how I felt when I saw that second plane hit the towers that day. I
remember how they tried to take our freedom.

But today, I saw thousands of people come to that spot. I saw a city
bursting with people, a city that the terrorists had hoped to crush,
going about its business. Walking free.

And if that wasn’t enough, as another thumb of the nose to the
terrorists, the Freedom Tower, scheduled to be finised in 2011, ten
years later, will reclaim the tallest building title for the WTC,
standing a whopping 1776 feet.

While the significance might be lost on the enemies of freedom, it
will surely not be on us.

One thought on “Remembering”